Essen 2003 - Search for the uncommons

Sebastian and I travelled to Essen on Saturday, which means getting up early to catch the first flight out of Munich. This year our plan was to search for and play games of foreign or small publishers as all games of the major German publishers would be available soon through plenty of online stores. And coming from Munich we will have the chance to play these games at the Munich "Spielwiesn" beginning of November anyhow. 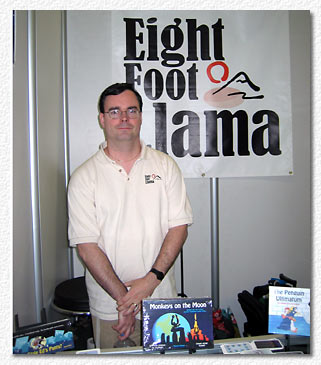 Due to very good connections at Düsseldorf airport and Essen main station we arrived earlier than usual at about 9:40 at the Gruga gates. Queues had already developed outside, but quite to our surprise not at the ticket offices as in the years before but rather at the entrance itself. We guessed that a lot more visitors were making use of the possibility to buy tickets in advance.

At 10 o'clock sharp the doors were opened and the crowds started to rush inside. Except for a brief visit at some of the game material suppliers' booths looking for small wooden disks to complete my "Marchants d'Empire" (to no avail - none were small enough) we decided to ignore halls 12, 11 and 10 for the morning and moved straight in to hall 9.

There we found the booth of "Eight Foot Llama" and a very friendly Jim Doherty, who played his "Monkeys on the Moon" with us. Sebastian liked it very much while I had some minor doubts because I got the impression that the game didn't have much depth (having played it twice since I have changed my mind, though). Nevertheless, I decided to buy a copy in addition to Jim's first game "Who stole Ed's pants", which I remembered having had a favourable review in the print edition of "Spielbox". Jim's latest release "The Penguin Ultimatum" didn't attract our attention as we believed it to be a children's game - wrong, as we now know. 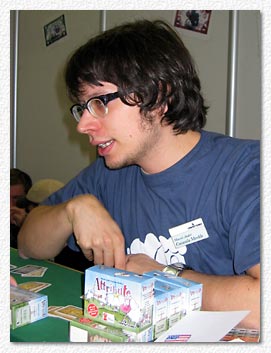 Our next visit was to the Lookout Games booth where we had the chance to meet Marcel-André Casasola Merkle, who was busy with explaining the English release of "Attribute". At that time hall 9 had become very crowded already and it was time to move on. We decided to go to hall 6 - the hall of fantasy games and role-playing. Sebastian wanted to check the various sellers of "Magic the Gathering" cards in order to strengthen his card deck. Our first stop was at the Fanpro booth - not only because of the spray painted barely dressed girl posing as a warrior but also to have a look at their "Mageknight" offerings. As always, the hall was crowded with people in fancy, fantasy style clothes looking anything from frightening to rather cute. Have a look here and you will know what I mean... 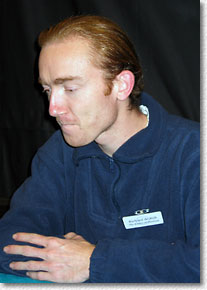 While Sebastian was flipping through lots of Magic card folders at the various booths I roamed the hall in search for some interesting games when my eyes caught sight of the "The Real of Fantasy" booth. They had their fantasy game "Anera's Arena" on display plus their new game "Atta Ants" by Richard de Rijk. After a brief explanation we had a game with three players and I was immediately fascinated by the game. Since the game material is of high quality and the game comes at a very reasonable price I bought one immediately.

My next stop was at the "DragonLords" booth which took me some time to find (the numbering system of the booths seemed to me to be not always intuitive). There I wanted to have a look at "Crystal Powers" the expansion set to "Quest for the Dragonlords", which actually was playtested by some of the Westpark Gamers. The guys at the booth were very friendly and enthusiastic about their game and judging by the amount of visitors they had I think they were quite right to be so.

Feeling hungry - it was 2 pm by now, we started our way back to halls 10 to 12 to grab some food there and to rest our already aching legs. On our way we passed the Winsome Games booth where we hoped to meet Helmut Ohley. As we were told all of the 1844 game copies he brought to Essen had been sold by Saturday and apparently he was now roaming the halls himself.

On our way to hall 12 we passed by a little booth (can't remember who it was) where they sold the German "Cosmic Encounter" Avalon Hill/Hasbro version for a mere 15 Euros. At that price I could not resist as I like the game a lot. And not being a real collector I am more interested in the game itself rather than being upset about the ugly and cumbersome game material AH/Hasbro decided to use as "enrichment". The only unfortunate thing is that this release is a four player game only (as opposed to the original EON release). 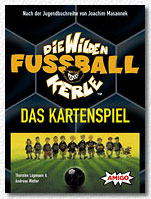 Having had something to eat we started to look for a free table to take a little rest and play one of the new games of the major German publishers. But not really to our surprise we had difficulties finding a place to sit. During our search we met Günther, also one of the Westpark Gamers, playing "Die wilden Fussballkerle" at the Amigo booth (booth really is an understatement as Amigo always covers a big part of hall 10 with lots and lots of tables). He and his companion were not really happy with the game, which came as a surprise to me as it got some good reviews. Sebastian and I were lucky to grab a free table at Amigo and found ourselves playing "Coyote", which was explained to us by one of the "KidultGame" hostesses there. The game requires that all players wear a headband (photo) making them look rather funny and Sebastian became very embarrassed about the way he looked and was glad when the game was over. 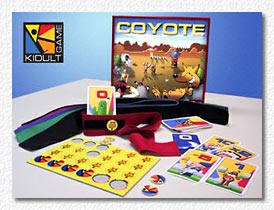 Then I remembered that "Doris & Frank" were supposed to have published an expansion set for their "Urland" so we continued on to their booth. Unfortunately, I had forgotten that the expansion merely was a set of new genes, so we moved on to Cwali's booth to have a look at their new games. We had a brief look at "Logistico" with an explanation by one of the guys at the stand (not Cornel) and decided that it's not something we want to buy.

Opposite the Cwali booth was Mike Lasher's "Globopolis" on display - much smaller than last year's. Mike didn't look all that happy and a quick chat with him revealed that sales figures of Globopolis still aren't what he had expected.

At the other end of the hall I had a look at Friedmann Friese's 2F booth and his new game "Finstere Flure" while Sebastian decided to play "Magic - The Gathering" against a few rookies at the Amigo stand. Since all playing slots for the rest of the day had been booked I had to content myself with just watching a group play the game with Friedemann providing instructions and hints. The game definitely looked interesting but since I had seen a copy in Günther's bags I decided against buying one. 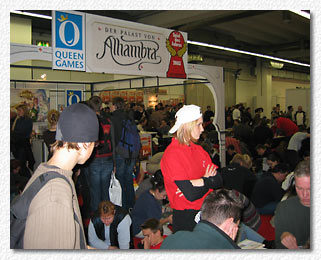 By now it was 6 pm with just one hour left and I picked up Sebastian to have a look at the "BeWitched" booth right next to 2F's. In the morning I had seen Andrea Meyer there explaining and playing her new game "Schwarzarbeit". By the time we arrived at the booth she had left but the very friendly folks from Drübberholz were still available. First we got a short introduction into "Schwarzarbeit" by Martina Hellmich after which we played a shortened version of the game with only cards from A to M. Maybe it was because it was already quite late (we had gotten out of bed at 5 am that day) but neither Sebastian nor I were able to follow the game enough to make good decisions. I suspected that the game really is a brain teaser with the amount of deduction and good memory required. Although I won in the end, "Schwarzarbeit" did not convince me to be a game I'd like to play often. Martina was then joined by Thorsten Gimmler and Hartmut Kommerell and we decided to have a go at their game "Ludoviel". This card game about games requires a good amount of knowledge about games to be able to play it and I believe that it may be very attractive to real geeks.

By the time we had finished "Ludoviel" it was time to leave as the fair was about to close its doors. Again, the "Spiel" fair was a very enjoyable but also demanding event for us. We didn't see as many new releases as in some of the past years but the general atmosphere was rather pleasant and it seemed to be more relaxed than in earlier years.