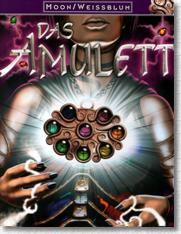 The Game: Travelling as one large group three to six players move across a board depicting a fantasy world with town and rural areas. In each of these areas gemstones are for sale (3 in a town area, 2 in a country area). The inhabitants of this world are willing to part with their precious gems if they are offered the resource they desperately need: metal. Each area of the map indicates the type of metal required (gold, silver, copper or iron). In their strive to collect 7 different gemstones (or any 8 of the 10 types) to win the game by filling the empty slots of a players amulet, hence the name of the game, players bid metal cards for the right to take one gemstone from the currently visited area. It goes to the player bidding the highest amount of the required type of metal. The group then moves on to an adjacent area of the map.

The third resource in this game are spell cards. The most important attribute of each spell is the amount of metal cards it creates per round (from 0 to 4). Most spells have additional effects, mostly on the bidding phase for gems (e.g. declaring a particular metal as a joker). Again, these spell cards are distributed to the player via a bidding round. And here the fourth and final resource comes into play: energy stones. At the start of the game each player receives 10 of these stones, which are used for bidding on spell cards and simultaneously as "energy" for a spell successfully bid on. Spells use up energy - high value spells at a higher speed than lower valued ones. "Used" energy stones are returned to the player and are again available for bidding on spells.

The game components are very well designed with plastic gemstones in easily distinguishable 10 colors and nicely drawn spell cards and a map board design that underlines the fantasy theme of the game.

Playing Time: The game can be explained in 5 to 10 minutes and played in about 60 to 90 minutes depending on the number of players.

Westpark Gamer's Opinion: What sounds like a rather dry resource management game really is an excellent bidding game. As usual with this kind of game all players are permanently involved and there is hardly any waiting for a player to finish his or her turn. Since there are no real "killer" combination of spell cards the decision on whether to bid and if so how much is usually straight forward. Care must be taken though to not acquire too many spells that yield no metal cards as this can have a disastrous effect: you not only get no metal cards for bidding on gemstones but you also have insufficient energy stones for a few rounds to bid on better spells (because they are allocated to your spells).

Where bidding on spell cards is straight forward and fast (there is just one bid per player) we found a small problem with the bidding on gemstones: since only the amount of metal cards in a player's hand need to be disclosed but not their type a player may be tempted to drive up the price for a gemstone by bidding more than he/she is actually able to pay. In our opinion the rules should state what happens if a player cannot pay the required amount of metal cards.