Guenther of our Westpark Gamers is always one who likes to bring along a rare German game. "Die verflixte 0" is one of these hard to find games, produced by a small Munich based game company which is now defunct.

This is a game for up to 4 players, each of which gets 6 wooden pins numbered from 0 to 5. The plastic game board consists of 6 rows with 6 holes each. Now each player in turn places one of his pins face down in the holes of the board (only s/he knows what number was played). After all players have played their pins all pins are revealed. Now the player with the highest added "line" of numbers (either diagonal or horizontal, interrupted by other pins or not) wins the game (only one line counts). The hitch is (mentioned in the title which means "The Accursed Zero") that a zero by ANY player in a line, even your own, nullifies this line completely and makes it worthless. 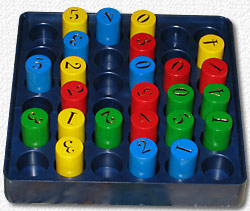 The limited board size makes this mainly a bluffing game. It is pretty obvious to all if a player tries to build a "big" line, basically it is an invitation to play a zero into the line. On the other hand "joining" a line made by another player might mean playing it safe, you just have to play higher numbers than your opponent. A sure-fire strategy was discovered in our 4 games that involved playing 3 pins in a diagonal row close to the side of the game board (in a line that leaves no room for pins by other players). If you manage to get three pins in a row like this, most favourably the highest pins 3, 4, 5, you usually win the game (as a zero cannot be placed to destroy the line once the third pin is played). A more devious strategy involved "faking" a winning line with let's say your "one" and "two" pin, forcing the other players to play a zero or something else to stop you from winning, then play another "real" line somewhere else. Of course the small board size doesn't exactly make this "Go" or "Chess", but then this is a relatively light-hearted strategy game that can easily be played in under 10 minutes (and explained in 1 minute), so it works amazingly well as a quick filler. A variant (which we didn't try) even involves betting on the outcome (so it becomes less important if you manage a good line or not) and collecting betting chips, so if you see these game somewhere you might like to give it a try: It isn't half bad!

How does it work? Each player gets 4 suits: Elephant, dog, cat and mouse, numbered 1-4 respectively. Each player plays a card face down, then they are simultaneously revealed. Now the highest Elephant played takes all dogs on the table (including other dogs played for the trick) as a trick, the highest dog takes all cats, the highest cat takes all mice, and the highest mouse takes all ... Elephants. Cards which haven't been taken (it is rare that all suits are played, as players usually compete for the highest numbered cards on the table) stay on the table for the next trick. If two players play the same number in a suit, they both cancel each other out, giving the trick to the next lowest number played. After all cards have been played, each player counts the value of all his cards and the highest score wins.

Of course this game demands you to think around. If many cats are on the table before a trick, you might be tempted to play a high dog, of course. But the others might think likewise, and cancel your card out. Of course the chance that many high dogs will be played means that even a low elephant card will profit from this. SOME dog might take the cats, but you'll get all the high dogs instead with your elephant, and that might be even better than taking the cats! Of course you can never be sure that the other players ALSO think like you, and somebody might win the cats with a low dog, while several elephants cancel each other out! Perhaps you should try mice?

So this is mostly a guessing game, not really a tactical card game. You might try to spare your high cards, but if all players do likewise you won't profit from it. A distinct strategy is difficult to formulate, it all depends on how well you can read the minds of your fellow players, which in the end comes down to pure luck.

To give you an example: on the table are a "3" and a "4" dog card, and a "4" mouse card. Dog is the highest suit on the table, therefore you would play the lowest MOUSE card (as elephants chase dogs, and elephants are chased by mice) in your hand.

1 round of play: 15 minutes maximum