The Ragnar Brothers designed many interesting games (among them one of my favourites: "History of the World") , so I immediately ordered a copy of "Viking Fury", their newest release. As always in their more recent games, the game material is unusual and includes their "trademark", a "tablecloth" game map. I often read negative comments about the latter feature of their games, but fact is that I personally find the "cloth" map very practical: It always lies flat, is easily folded and stored, weighs little, looks nice, and the best feature: The counters stay where they are on the map because of the added friction of the cloth! With the cloth come wooden cubes, two decks of cards, and one counter sheet (printed on reasonably heavy stock).

The players take on the role of Viking longship "captains" in this game of trade, plunder and colonization. The game mixes abstract and historical elements into an appealing whole, without using cumbersome rules. Let's go into detail: Basically this is a game of "action point management" (action points being the moves of your longship). The more efficiently you plan your travels the more VP's you make (yes, this is a game where - not really surprisingly - the player with the most VPs wins in the end. Do I really have to say it?).

Each player commands one (only) longship represented by a card with empty spaces, starting in a generic "Wintering space". Each of the empty spaces of your ship can be filled with either men (cubes in your colour) or goods (there are three different goods). Men are good for raiding and colonization, goods can be sold for immediate VP's at the various ports of the (mostly European) world. When you have filled up your ship you move into one of the three "Viking starting ports", where you can spend additional actions to draw "Rune"-cards (more about the role of the cards later on). Game actions (of which you have seven each turn) are divided into "preparation actions" (drawing cards, placing men or goods) or "movement actions". They can be combined in any way, but the sum should never be more than seven. You are never forced to set sail, but once you do you can only return to the wintering space when having only one man left on board (this can be forced as well). You can deliberately throw everything over board though anytime, but returning to the wintering space always ends your turn. 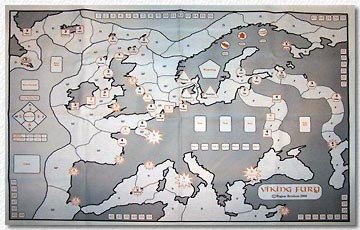 The map depicts Europe and various ports valued from 2-5 - the graphics are slightly abstract and confusing, at first you might think that the mainland is the sea and vice versa. Another problem is that the port spaces always need to be seen as the number they bear is always important, but most of the time this number is covered up by the counters you place on the ports. We ended up placing the counters slightly to the side of the ports, but that is not an ideal solution.

Ports are either grouped in threes or are "independent". Some ports also have treasure, which is placed secretly at the beginning of the game. There are three large treasures (8, 10 and 12 VP) and several "small" treasures (ranging from 3-6).

Entering or leaving a port costs one movement point, travelling on the seas uses an ingenious system: There are 4 "general" sea zones (N, W, E, S), which have a different maximum movement allowance. You can go beyond this allowance any time, but doing so costs you men or goods (you decide which). In addition there is a "wind rose" which can be turned every time you play or discard a Rune card (a fiddly rule easily overlooked in the rule book) which gives bonuses or minuses to each sea zone. The wind rose certainly sees a lot of action in the game, so it is usually a good idea to travel where others travel too, as this means that other players will care for good wind conditions, in their interest...

If you are at a port, you have three options:

Depending on your goals these activities often result in the funny situation that you first soften up the natives with your goods, making them lazy and more susceptible for your raid attack where you steal their treasure, and then you hit again and colonize them! It's a wonder the inhabitants of Europe put up with this for so long

Another incentive is the "Saga" cards, which I have not mentioned yet. These are similar to "missions", for example "colonize these three ports" or "trade with these three ports". The player who fulfils one of these missions immediately gets the card, no matter who else was involved. This means that somebody who colonizes two ports will get nothing if another player colonizes the decisive third and last port!

The Saga cards essentially drive the game forward as they give a LOT of VP's at the end- they also run through three stages - The longships get bigger if a new stage is reached, recreating the historically increasing seamanship of the Vikings. There are never all Saga cards in play (some are randomly removed before play), so if you sneakily trade with faraway port "triplets", hoping to fulfil their mission later on, your plan might be foiled by the simple fact that this specific mission never appears! Player interaction is mostly "racing" for specific ports or goals, direct combat is normally not possible. The "Rune" cards bring some spice in the game, as they allow you specific rules bending actions which also might involve attacking already occupied locations. Some of the cards are extremely strong though - There is one card which can effectively cost another player up to 20 VP without the card-playing player having anything to do but play the card. This seems unfair and is certainly an invitation for "kingmaking", so we would recommend simply removing the cards that seem to harsh or unfair from the game. The majority of the cards work well though.

The game ends three turns after the three last possible missions have appeared or been "solved". Now each player gets more VP's: Each colonized port is worth it's value, or double it's value when two ports of a "triplet" are occupied, or triple value when three ports of a triplet are occupied. Each mission card is worth 10 if you have the most of a series (Denmark, Sweden or Norway). Finally owning the most treasures gives an additional 3 points per treasure.

In our first gaming the scoring was wide off - the winner ended up with more than double the VP's than the other players, but this is partly the "Rune"-cards fault. Future games might be closer...

We found this game to be a lot of fun - all 4 players felt totally absorbed by the game. There was no feeling of "downtime" as everybody desperately tried to find the best routes to fulfil the most goals in their head when it was not their turn. The rules are neither too simple nor too complicated, and the game plays astonishingly "epic" in a relatively short time (we played 2 ½ hours with 4 newbie players, an additional half hour was spent with explaining the rules). Don't misunderstand me: This is by no means a short, quick game, but if you compare it with monsters like "History of the World" or even the overrated "Mare Nostrum" you'll find this game a breeze. All testers were sure about wanting to play the game again, which is usually a very good sign. I personally think it is one of the Ragnar's best designs to date, although the "Rune" cards remain a slight disappointment. There is a luck element with the roll of the dice, but usually your chances are pretty calculable when playing carefully, so it didn't disturb us that much.