When it's your turn in Neuland, you have a maximum of 10 actions. You can spend those actions on the production either of raw products (e.g. wood) or of new production sites (e.g. lumberjack cabin). The gist of the game is "production sequences". I will explain this unwieldy coinage of mine with the example of a turn and you'll see what I mean. I produce one piece of food (1st action). I use this piece of food to produce a piece of rock (2nd action). I use the piece of rock to build a paper mill (3rd action). Again, I produce first a piece of food (4th action) which I employ this time for the production of wood (5th action). This wood becomes paper (6th action). Once more, I produce food (7th action), then stone (8th action). This time, I use the stone to build some victory point site (9th action). In the next turn (let's imagine no other player acted) I produce food (1st action), then stone (2nd action), then I activate the victory point site with the paper from last turn and the stone (3rd action) and I get some victory points. 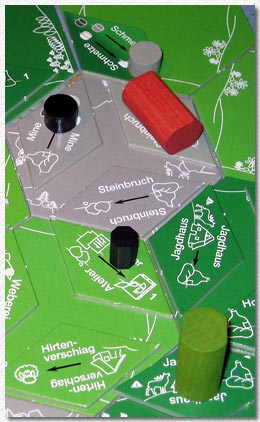 This kind of production sequences can be much fun, e.g. in the computer game Civilization (cultural advances). It is a gaming mechanism that works very well with solitaire games since it can be mind thrilling to find the best sequence of production. However, in Neuland, it doesn't work out at all. We were four experienced players. No one would finish his/her turn before having found the best sequences. This means: much calculating (for the active player), much boredom (for all others). Individual turns tended to last 10+ minutes. Since production sites are "public" (any player can use them, no matter who originally built them) you have to carefully ponder whether you should really establish e.g. a paper mill. Worse: Whenever you build a victory point site, you make another victory point site available (which was not available before the other one was built). You are allowed to check the stack. However, this means even more calculating: If I build this site, I might give the next player the opportunity to build a site that awards more victory points. Just another factor for your mental arithmetic!

There are positive things about Neuland. The playing material consists of very nice wood pieces (but you pay dearly with 44 Euros for that!) and I liked the next-player mechanism very much: The fewer actions you use, the sooner it's your turn again. However, this is not enough to save Neuland. Gameplay is simply boring. It's not much fun to watch others calculating most of the time and to do some math yourself once in a while. Neuland is too complicated for the occasional player and too calculable for the seasoned veteran.