This game is really cool. When unpacking the components you might fear that it is a kids' game: The board is placed on the game box so that you get a "real" 3D waterfall. The gems you have to collect aren't card box counters but plastic gems (the kind that may constitute the treasure of 11 year old girls), and the board has structures featuring shallow pits where to put the gems.

However, the coolest things are the Petri dishes (as Sebastian baptized them appropriately). The Petri dishes constitute the "river": Each dish is one area where players' canoes can be. At the end of each turn, the "river" advances: New dishes arrive upstream and push the old dishes (and the canoes on them) towards the fall. Due to some ingenious mechanism (don't ask me why - it must have to do something with geometry) the dishes fall alternating from the left and the right fall.

The game itself uses well-known mechanisms. Players have chits from 1-6 plus a weather chip and they start a turn by choosing one and putting it upside-down. Then, they move one-by-one. What they want are those gems. In order to win, you need four identical ones, five different ones or any seven. You can pick them up from the pits or from your fellow players' canoes (but raiding is only possible when traveling upstream). In addition, when you move, you have to spend all your moving allowance. At the end of the turn, the river advances by the value of the lowest chip plus a weather value (which initially is 0 but can be changed to -1, 0, +1, +2 by the already mentioned weather chits). All chits have to be played. Only at the end of the 7th turn, all chits are available again. 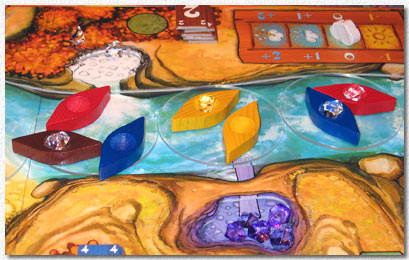 These simply rules allow for lots of tactics: How far can I advanced without giving anyone a chance of raiding (remember, if there's no-one downstream of you, no-one can raid)? How far will the river advance (you can't tell at the beginning, but if everyone has only 1-2 chits left and if you have paid attention, you can)? Is someone threatening to win (don't forget, there are three victory conditions, and if you want to go for seven gems, you'll quickly overlook someone who collects four identical ones)?

These are only a few examples of the kind of questions you have to consider while playing Niagara. This game offers fun and some challenge for seasoned players, and it can still be explained to beginners with no trouble. Gameplay is very quick since you cannot forfeit your moving allowance. And the haptic/optic impression of Niagara is excellent. Niagara is wholeheartedly recommended to anyone.