Quest For The Dragonlords: The Advanced Game Expansion

Two years ago the independent game designer Robert Johannessen from Canada single-handedly revived the grand epic risk-style wargame-cum-adventure fantasy game genre (lying dormant since "Battlemist" from Fantasy Flight) with his major effort "Quest For The Dragon Lords", a beautifully produced game with lots of figurines and cards in a sturdy box packed to the rim with goodies. The game found many friends (including me) and so it was no surprise that last year saw the "Crystals of Power" expansion, which made 5 and 6 player games possible.

With the "Advanced Game Expansion" Dragonlords gets it's first "real" expansion, which adds additional rules to make the game more varied. It can be used with or without the "Crystals of Power" expansion.

"Dragonlords" is one of the few games that combine "Talisman" style fantasy adventure with epic battles. It has relatively simple rules and a reasonably short playing time (for such games), making it possible to play a full game in an evening. This does not really change with the expansion, but players should be well familiar with the original game to fully enjoy the new rules.

What does the expansion change?

First of all the battle rules have been changed for the third time (after streamlining them a little in the "Crystals of Power") and an all new battleboard is introduced, which is reminiscent of "Axis&Allies"-type games. The main reason for the battleboard is to make large battles easier to play and keep track of (it is actually not necessary to use the board in the many smaller battles the game usually sees), but it also shines by introducing some new tactical options which spice things up considerably. These include rules for flanking and a revised magic system. 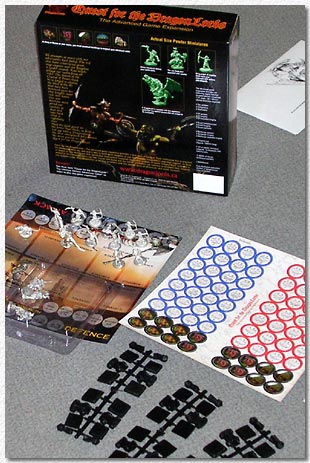 The second major change is the introduction of buildings and a tech tree. As an alternative to buying the "ordinary" units players can now invest in the development of more powerful offensive or defensive units and abilities through the placement of buildings, which gives the game a totally new dynamic. The tech tree is kept relatively simple to keep it playable, but the options it gives the players will result in more varying strategies than before. There are also some buildings that only work with certain races - the formerly weak dwarves especially profit from this as they now can build mighty cannons with the alchemists lab for example. Wizards can now research and buy spells at a temple, not necessarily having to travel to the Wastelands as before. The game comes with beautiful pewter figures to represent the new units, there are also slightly boring looking counters that one can use in addition. The new units all bring different advantages, but as so often in games of this type it is the well-mixed army, which will be most successful.

One can also fortify additional spaces now, which makes the introduction of Siege rules necessary. The Siege rules actually drive the game forward, as laying siege to a space can majorly affect the production abilities of your opponent and can even lead to a quick victory if handled the right way.

All these rules combined make for a deeper but also, as could be expected, slightly "slower" experience of Dragonlords. QFTDL is still not a deeply strategic game- part of the fun comes from the all-out chaos reigning on the board, but the expansion set is a major attempt to give players with good "empire building" skills a certain edge and a more rewarding gaming experience.

It is especially nice to see that Johannessen and his crew are clearly dedicated to keep the game alive and interesting. If you talk to him, he is certainly full of enthusiasm and interesting ideas that he wants to try out to satisfy the fans of the game. And it is already clear that the development of "Dragonlords" has not stopped with this effort. This dedication to increasing perfection is certainly a nice change in a scene, which is increasingly dominated by people trying to make a quick buck with half-baked designs that soon end up as unfinished torsos. Therefore I can fully recommend the game to fantasy enthusiasts - don't expect the game to be perfect, it still need some tweaks here and there (and Johannessen is working on it), but the sheer enthusiasm for the project makes it stand out from a lot of mediocrity in the genre. Compared to the products of the big player game companies QFTDL is still like a slightly wild grunge band, but it has something that others don't have - the heart is definitely in it!