Looking for a filler game? A game that is perfect to start or finish a game session? Then your probably looking for something with short rules that can be explained quickly and played quickly just as well. In addition, it should have a kind of fun factor rather than requiring deep tactical analysis. There are already a good number of games falling into this category, like "Take 6", "Liar's Dice" or "Hol's der Geier" to mention just a few.

In Essen 2004 Amigo presented their new card game "Geschenkt …ist noch zu teuer" (literally: "For free …is still overpriced"), which is supposed to extend this line of games. The game principle is very simple:

From a deck of 32 cards, numbered 3 to 35, nine hidden cards are removed at random. The remainder of the deck is then used for play. The start player turns over the top card and may either take it for free or pay one coin for NOT taking it. If the card is not taken, the next player in sequence makes a similar decision: take the card plus the coin(s) for free or pay a coin to pass. The catch is that any cards taken count NEGATIVE points according to their face value and coins count positive at the end of the game, hence the game's German name. 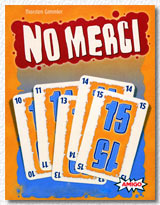 So far this sounds simple but rather boring at the same time. However, one small additional rule changes the game play and adds considerable fun and challenge to the game: if a player has collected cards in sequence only the LOWEST card of that sequence is counted. Now it becomes clear why nine random cards are removed from the deck before the game starts: this creates random "holes" in possible card sequences and players always run a risk of not being able to create a straight sequence of cards.

I played the game with three different groups and the verdict ranged from "boring" to "fun". Of course, there is no real depth or challenge in this game, but that's not something one would want in a filler game, anyway. This may explain the "boring" statement from one group. However, like in "Take 6" or "Hol's der Geier" one's fate is heavily dependent on card luck and player interactions. Especially the latter plays a big role in "Geschenkt" when played with the right group of people, because a lot of gloating is involved when that important missing card of a sequence is taken by an other player (or isn't in the deck at all). This is what players will aim for, taking a considerable risk for themselves at the same time (hence the English title of the game).

Like the three other filler games mentioned above, "Geschenkt" should be played with four or five players and it needs to be played several times before the real fun factor is discovered.