The expectation for the new AH's first pirate-themed game was enormous, but many a gamer felt slightly puzzled when looking at the back box of the published game, clearly depicting a game that looks like a hybrid of "Monopoly" and "Talisman" instead of an updated and playable "Blackbeard".

After reading the rules of and playing the game it is evident that this is anything but a typical AH game, rather something that Parker or MB could have published (even under Hasbro the line has tried to maintain a certain "gamer" status, but the powers-that-be seem to want to change this in the future with baser offerings). "Sword and Skull" is mainly a family game, and perhaps one has to judge it not by playing it with gamers but with kids and family. But then nobody is looking for a family game when purchasing an AH brand game. This dichotomy is the crux of the problem that I have with "Sword and Skull".

The game material is up to AH's new standards, each player gets two nice figurines, an officer and a pirate. Both try to retrieve a stolen ship from the evil pirate king (i.e. find the crown of command, for "Talisman" fans). To achieve this they move around the board in clockwise fashion, a roll of two dice gives two choices of movement points, and only one of both figures can be moved. If you roll doubles, BOTH figures move forcedly (sometimes to unwanted effect), and if you roll a double naught you can teleport a figure to any space on the outer track. At first glance this seems to give more options for movement than in "Talisman", but actually this is not so, because of the one-direction-only movement. Moreover, doubles are common with two dice! The spaces consist of mainly "settlements", these work exactly as in "Monopoly", you get "shares" (for free though) that represent armed personnel that is accompanying you. Some bolster your pirate, some your officer. You can also go for personnel with money symbols (1 is normal, 2 is maximum). Owning them forces player that land on the same settlement space later on to pay "mortgage" to you. You even get money when you pass "Go", sorry, "Start" on your way around the board. 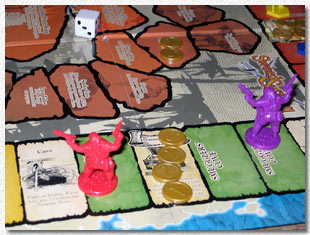 Some spaces let you buy equipment, which works very much like in "Talisman", there are also gold hexes that constantly replenish themselves (and therefore bring more and more money into the continuum, actually a good idea). You can also fight combats against creatures, but this is actually a less important factor in the game, although the rewards are sometimes high. Much more often, you will fight your fellow players, especially with 4 or 5 players. The outer track around the pirate's cove has actually very few spaces, and as each player has TWO pawns it is practically impossible to tread somewhere without landing on another players pirate or officer's feet, forcing you to fight battle after tedious battle. Like in "Talisman", combat is handled by dice. Losing is not severe, but it is possible to steal "shares" from other players, which somehow leads the whole "Monopoly" business ad absurdum. Imagine playing "Monopoly" - already an awful game - and players could STEAL your shares by rolling higher in combat! This happens so often that it is actually useless to follow any money strategy, which first presents itself when reading the rules (you can bribe the pirate king instead of fighting him to win the game). 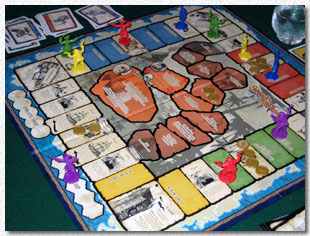 Trying to end the game is even worse: to find the pirate king, players have to enter a one-way path that is not even an advanced form of "Snakes and Ladders", it IS "Snakes and Ladders". No matter how prepared you are, rolling the wrong number will kick you back to starting space, quite literally. One space in the middle accumulates gold like hell; the first player landing there (by pure luck of course) will most likely win by money. Otherwise, you could try to beat the pirate king and his henchman by combat.

Regardless of what "strategy" you follow, you will have to roll many dice and wait a long time until the game finally grinds to an end. Playing time is certainly shorter than in "Monopoly", but still a bit to long to enjoy this purely as a quick, silly diversion. We had some fun playing though, the theme is handled well and present throughout, and there is lots of Schadenfreude as you see other players lose what they have accumulated so far. There are also several mechanics that are designed to bring back players who fall behind, also a nice touch. When we stopped playing (because of the last train back home), no player could be said to be the clear winner.

A winner this game certainly ain't, though, simply through addressing a misjudged audience. It is an okay little family game, and nobody would bother had it been published like that, but presenting it under the AH label is a kind of strange insult. Although one has to admit that the old AH has published worse in their time - "Global Survival" or "Assassin" anyone? Compared to these heinous miscreations "Sword and Skull" could indeed be called a masterpiece. Decide for yourself, if this game is for you for its pure fun factor only, we were slightly disappointed to be honest. Take my bloody word fer it, matey. Ahoi!