This game might be overlooked by some, as it has - sorry Ian - some of the ugliest card graphics I've ever seen in a game. The drawings seem to come from a time way back when one - as a 12-year old - assembled little ugly drawings with the mouse in the first ever graphics programs on the old Commodore 64, pixellated and shaky lines included. Even worse, a really cheap inkjet colour printer has been used for the original layouts, which makes some colours appear differently on each card. Finally the decision to use violet and purple as different (I'm not kidding!) player colours is close to Monty-Pythonesque madness….

On the good side it has to be noted that

Actually Fruit Bandits is a nice little bluffing/guessing game that plays at a brisk pace and doesn't outstay its welcome. Each player randomly draws one of 9 different "yield" cards (numbered 2-10) to determine the possible harvest, placing it openly in front of him/her. Now each player has up to 4 possibilities: s/he can

Note: The player, who plays the violet card, can steal from the violet OR the blue player, if he can convince them. Only kidding. 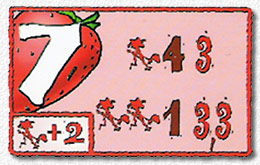 Each yield card has several numbers on it. Basically the full amount is divided equally between bandit and harvester if the owning player harvests and only one player steals. If two players steal, the booty is divided only between the thieves, the harvester gets nothing. If three players steal, nobody gets anything as the fruit is "squashed". 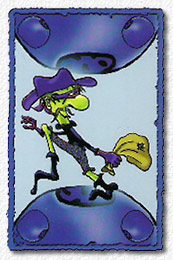 It is important to note that the thieves only get the fruits if there actually is a harvest card played by the owning player. This is very clearly stated in the rules, but for some reason we completely overlooked this rule and played the game wrong! The funny thing is that in my opinion this actually works a little better than the original game, as the element of bluff is still maintained but the possible card plays can be foreseen a little better (but never completely). Each combo of cards (the random yield card draw is a very important design element in the game, as it makes for new combinations each round) creates a new puzzle each time, especially when looking at the current VP's of each player. It should also be noted that there are two special yield cards that spice things up. One gives thieves and harvesters an equal share, even if there are two thieves, and the booty is not divided but always the same. The other card gives the player who doesn't harvest but steals instead a bonus of 2 VP's.

Using our unwittingly "optional" rule or not, this is a light and fun game. It might profit from more "special" cards like the ones described above, but as a light and quick filler game with content this is a winner.