Alexander the Great has a varied history as a game theme. First there was "Battles of Alexander the Great" which had reportedly one of the most garish game boards of all time (described as looking like a pile of puke by one reviewer), then there was a series of board/computer games ("The Great Battles of Alexander") that successfully captured the feel and strategy of ancient warfare, then Colin Farrell came along in a stinker of a film that again prompted Phalanx to produce this fine boardgame (that is obviously not based on the film licence). The fear of encountering anything resembling the film might be one of the reasons why geeks may overlook this game, which would be a shame, because the design is - while not being a groundbreaking endeavour - certainly solid enough to reward a closer look.

The map reminds one of an area wargame, which is very far from what the game actually is. Only a small part of the map is used at a time, and a lot of map space is "dead" space - it's never used at all because as players we follow Alexander's route of conquest and there were some lands he never actually went to, even though many think that the guy was simply everywhere (while being haunted by the image by Angelina Jolie as his mum).

The players represent unknown lesser generals (or underlings) of Alexander, who lead his armies to some temple and city building on the side, while competing to be the biggest honcho doing this. The game is played in a succession of "areas", a couple of board spaces connected by various movement arrows. Each of these areas is played a maximum of three rounds, but impatient generals can shorten this by prematurely moving their armies to the respective last space of each area. 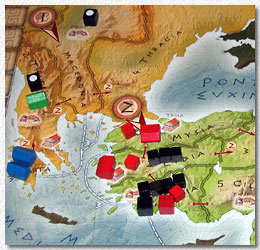 At the beginning of each area players secretly place their 15 "resource" cubes on the 4 spaces of their "planning" board, hidden from the prying eyes of the other generals. One can place cubes on the "turn order" space, the "army" space, the "temple" space or the "city" space. After all players have done their planning, the most decisive phase in the game, they reveal their choices. Whoever invested most in "turn order" can now move his turn order pawn to any space (usually coming last is most desirable), the others following in order of the amount bid. Then the armies placed on the "army" space are brought in the play (this is the only time that armies enter the game in an area). Each army has three movement points and can move independently, but the crossing of movement arrows often demands the expenditure of extra resource cubes that have to be taken from the cubes placed on "temples" or "cities". After you have moved your armies you can "threaten" to build temples or cities in each space (if the space itself allows it) - if you have at least one army cube there - by placing a tilted temple or city meeple. 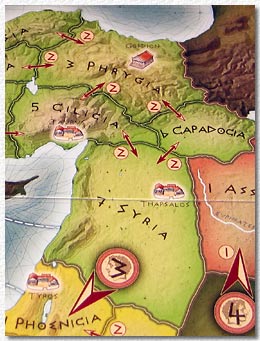 After all players have gone through these phases each space is checked in numerical order. If one player has the majority in army cubes there, s/he gets two points for a start. Then the generals decide among themselves who will build the city. The player who invested most cubes in the "city" space will build the city (on rock and roll, presumably), paying as much as the player with the second most cubes plus one or at least two cubes if no player competes. A city immediately brings 5 VP as well. The other players grudgingly destroy their half built city, probably pouting a lot. Temples work similarly, but they only give 3 VP, while building them costs one less then cities. With this building and competing a round is finished and players can now use the still unspent cubes to distribute them again on their temple and city spaces respectively. No new armies appear in the next rounds though, one has to live with what one brought into the area at the beginning, which of course favours the player who went for majority VP's and brought a lot of his fighting buddies into the area. Also players who spent a lot for their temples and cities now look on sheepishly as their opponents still have many cubes to act while they are empty handed.

When the last area is played through, players count majorities in each formerly played area (who has the most cities or the most temples in each area gets 5 VP) and their total of built temples and cities (most temples=15 VP, most cities=10 VP). As one can guess the final scoring can change positions wildly - it is not uncommon to see one player moving from last place to first place here. Also it is a little strange that majorities of temples and cities per area are not counted immediately but only at the end of the game, as these majorities never change until the end of the game, once the hordes of Alexander have left the lands not a stone is moved there anymore.

One of the nice aspects of the game is the "starting afresh" mechanic. When an area is played through and you messed up totally you can start on absolutely equal terms in the next area. All used cubes are regenerated, and all players start again with 15 cubes, regardless of how successful they were before.

It is even tactically valid to deliberately fall behind, as player last on the scoring track are always preferred when deciding turn order, even if they don't bid anything.

With freaks the game can become quite tense. As all cube selections are open and there is absolutely no element of luck involved there can be quite a lot of "calculating your move", turn angst or analysis paralysis. Very often things can also get quite complicated when several prospective temples and cities are in the making and you have to calculate the losses of your opponents through until you arrive at a "perfect" move. Therefore this is a "silent" game with relatively little in-game communication - each one ponders their move and that's it. But then skill is usually rewarded, and each area differs slightly from the previous ones in tactics, so players who play the game without thinking a little longer will usually lose.

The game board graphics are nice (although one has to look at some spaces with a looking glass when looking for temple or city symbols, and some spaces can also become very crowded - perhaps several smaller boards would have been better?), the rules are well laid out and simple, although some concepts could have been explained a bit more in detail. But all in all this is a solid effort which rewards repeated play and might well turn out to be one of the many unjustly overlooked games of 2005.