Although "Magic Realm" is sometimes viewed as the "Advanced Squad Leader" of Fantasy Games, it is probably not played as much as ASL, which actually still has a big fan base. Very often "MR" is on the receiving side of jokes, many consider it to be one of the big flops of Avalon Hill, and there are legendary stories about it's reception, like the university professor that wrote Avalon Hill that he was considered a person with a really high IQ and a successful scientist but STILL couldn't get the "Magic Realm" rules.

And many of these legends are true. Yes, the rulebook IS huge, actually comparable to the large tomes of many Fantasy Role Playing Games, and the first two editions of the game were very obscure, with many passages requiring several readings to understand them, and even then you couldn't be sure. And yes, setup is a drag, taking around 45 minutes, with all the different treasure and spell cards to be shuffled and placed awkwardly on a too small mat, and that is before you even start to create the board itself.

But one thing is also sure: Anybody, and I really mean anybody, who has ever made an honest effort to play and understand this game, and has not been frustrated by it or given up, is - and there is no doubt about that - in love with this game. Because it is, after all things Talisman, Runebound, Warcraft and what-not have been said and done, the best, most lovingly developed and complete fantasy game ever created. And astonishingly enough: one of the most PLAYABLE.

Yes, I think that "Magic Realm" is more playable then Talisman or Runebound, I am absolutely sure of that. Playing a complete game of "Magic Realm" can be done in 2-3 hours when people play who know what they are doing. And it can be played by a large number of players (actually up to 16) without the game ever bogging down, thanks to a very ingenious system of written simultaneous orders. And in contrast to most fantasy games out there it is a game where luck doesn't play an all-overpowering role; instead it rewards strategy and planning. The combat system is extremely clever and extremely unforgiving. If you take up combat with a monster that's more powerful than you, you won't have a chance. There won't be a lucky roll, there won't be an event card that saves you. You will die. And that's how it should be in any system that realistically portrays a fantasy world (Of course you will be allowed to start a new character). But in contrast to most games that make monsters appear chaotically by drawing an adventure card or something monsters in "MR" don't just pop up, they appear in certain places where they usually make their home. You can EXPECT them there, but you never will be sure if they WILL be there. 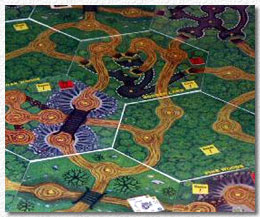 The world of "MR" is made up of various terrain hexes that are placed at the beginning of the game and always make for a new world. Each tile has a normal and an "enchanted" side, sometimes with different road connections. Navigating this "maze" of paths is one of the most interesting aspects of the game. On each hex there are "alarm" chits, which are randomly placed at the beginning of the game. Each of these chits corresponds to a certain group of monsters on the ingenious monster matrix, so you never know what monster exactly will appear, but you have a good idea that walking in to the mountain caves will have a high chance of you encountering a dragon, for example. One of the challenges of "MR" is knowing what monsters you should avoid with your character and therefore plan your path through the realm. Of course there is always the "hide" action, which enables even weak characters to navigate through dangerous tiles, but with a risk involved.

Characters act and fight through the use of chits. Each action like moving, swinging a sword or doing a spell comes in Light, Medium, Heavy or Tremendous versions. Depending on the character you play these chits have one or two stars, limiting their use or forcing you to exhaust chits if you overstrain yourself. This four tiers system corresponds with everything you do in the game, and is actually very logical and easily understood. To wear an armour which is defined as "heavy" you need to play a "heavy" movement chit, otherwise you won't be able to don it. Easy, isn't it? Actually the game is far from obscure or difficult once you play it, and there are no myriad exceptions or special rules like in ASL. The best way to learn "Magic Realm" is have someone teach it to you. I have yet to find somebody who finds the game too complicated when I taught it to them, because it actually plays very fluidly and logical. Yes, if you do the "full Monty", and include all advanced and optional rules you will have a lot to read, but the "full game" also simulates an absolutely complete and logical fantasy world with seasons, days and nights, weather, warring factions of natives that act realistically, buy your items or sell you items, can be hired, move around, monsters that have their own life, players that interact in complicated ways and each have completely different and interesting goals, a fully fledged magic system that is by far the most interesting of any Fantasy RPG's, in short: the world of "Magic Realm" really "lives" in the best sense of the world, it has a flawless internal logic to it that is far more realistic than the event-card driven games of the "Talisman" school, but can still surprise you at any moment. Although I have played the game really often I still have yet to use every possible spell combination or every available magic item, so many possibilities does the game offer. In addition each of the 16 available characters does not only have 2 special abilities, but also a completely different set of movement, magic and battle chits, which makes each character totally unique and forces players to develop different strategies for each of them.

Another nice aspect of the game is the graphical design - there is a uniqueness to the monster icons, the tile design, the character portraits, which can only be compared to the legendary "Titan" game, which also profits from a particularly artistic design. The only less successful bit is the combat mat, which looks like an Excel chart.

If you are a fan of fantasy games and want to play the grandmother of all these games, a game that has actually influenced a lot more games than many people think (among them "Settlers of Catan", "MR" was the first game to use large terrain hex tiles), give "MR" a try. There is still a sizeable scene of players out there, with electronic boards available in many mediums, among them Vassal and Cyberboard. There is even a standalone computer version in the works which is half functional, but unfortunately does not work with my Windows XP 64 machine. If you check out the "MR" entry at Boardgamegeek you will find many links that lead you to interesting places, among them many fan-made variants of the game and a third edition of the rules that has been done by fans together with legendary designer Richard Hamblen.

Therefore it is only fitting that "Magic Realm" becomes our first new format GEM OF THE MONTH, and a tribute to Richard Hamblen, one of the great underrated designers of many of Avalon Hill's finest games (Merchant of Venus and Gunslinger among them).