Games using a sci-fi theme are usually not considered to be mainstream products and sometimes only cover a niche market. In the past games like "Merchant of Venus" by Richard Hamblen, "Buck Rogers" by Jeff Grubb or "2038" by Tom Lehmann were definitely well received as gamers' games but never managed to (or intended to?) enter the mass market. Recent publications like "Die Sternenfahrer von Catan" or "Space Dealer" tried to translate well-known elements into a sci-fi setting or combined new game mechanics with trusted ones using a sci-fi theme as the background. Interestingly, those endeavours did not benefit from their heritages and I dare to say that their success has at least been hampered by the sci-fi theme.

These were the thoughts when we unpacked "Galaxy Trucker", a new game by Vlaada Chvátil also known for his games "Graenaland" and "Through The Ages". "Galaxy Trucker" will be released by the new publisher Czech Games Edition in time for Essen 2007.

The rules and the components of the game immediately triggered memories of both "Sternenfahrer" and "Space Dealer". Two to four players have the task to build spaceships and then explore outer space in search for valuable goods they can sell at the end of their journey. The game starts with a shipbuilding phase where all players simultaneously try to build a well-functioning and safe spaceship using ship part tiles from a common pile. The duration of this phase is controlled by a timer, creating time pressure for the players when building their ships. This time pressure uses a clever mechanic that is fair and adaptive to the speed of the player group. An hourglass may be moved along a track by the players whenever is runs out, and is turned over again. Ingeniously, the player shifting the timer to the last space on the track must cease building when he/she does so. Once the timer has run out on the final space of the track all shipbuilding must stop immediately. Moving the hourglass is optional, therefore players have it in their hands how long the building phase lasts, while still guaranteeing a minimum building time.

When reading this rule we became a little worried about how this would work in practice, actually expecting a lot of chaotic grabbing of ship tiles and a general mess in the middle of the table. Real play then showed that this is by no means the case. Despite the time pressure building was carried out controlled and organized and became only a little hectic when the timer had been turned for the final run.

The reasons why shipbuilding is controlled rather than chaotic are manifold. First, the ship part tiles are all face down when the ship building phase commences. Only tiles returned to the pile because players render them unsuitable for their ship are turned face up. So there is no jumping on that e.g. "best engine" tile because nobody knows where it is. Instead everybody grabs a tile and tries to determine if and how it can extend ones ship in a suitable way. Secondly, ship part tiles come in different types (engines, guns, shields, cargo bays, crew cabins, universal connection modules) and connection styles so that players need to spend some time on finding out if a tile fits their needs. 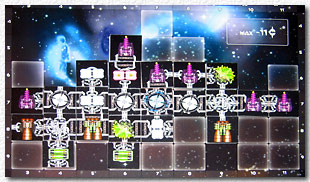 Once the timer has run out on the final track space and all shipbuilding has stopped players begin to check each other's spaceships for validity. Any part not properly connected according to the rules must be removed from the ship, sometimes disconnecting additional structures from the main body of the ship, which then also need to be removed. In our game we did not manage a single round of the game without at least one player having to remove tiles. This gives an indication that it is not too easy to build ships under time pressure.

When all ships have been checked the second phase of the game starts: the space mission. The motor of this phase are event cards laid out in four stacks. The spaceships, represented by pawns in the players' colours, are placed on the "flight board" showing a race track for the intergalactic mission. The initial sequence in which the spaceships are positioned is determined by the order in which the players completed their shipbuilding, with the first player to complete his/her ship being the first to select his/her starting position. Once the ships are all lined up the player of the leading ship draws an event card from any one of the four stacks. Being the owner of the leading ship and thereby being able to select the stack to draw from has a distinct advantage: during the shipbuilding phase players are allowed to inspect any one of three stacks, the fourth remains secret to all players. This way players are able to build their ship according to the events that will happen during the mission and they even know which event are in which stack, with of course a bit of uncertainty about what evil might lure in the undisclosed fourth stack.

Events come in three general types: they either provide an opportunity to collect goods or they pose a threat to the ship and may destroy parts of it, or they represent empty space where the ship travels forwards in the race track according to its engine power.

Once the last event card has been drawn and executed the space mission is over and the players collect credits for the goods they have on board and the position they hold on the flight board. Then a bonus is paid to the player with the best-looking ship. 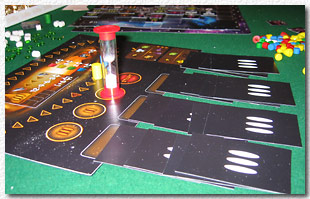 The game is played in three rounds with each additional round increasing the size of the spaceship that can be built while at the same time increasing the number and severity of events threatening the ships. Sometimes in the second and third round ships may be damaged so severely that they have only a minute chance to finish the mission. The rules cover this situation quite well by allowing a player to abort the ship's travel and still collect credits for the goods transported, although only half of their value is paid in this case. Our experience is that such a situation happens rather often and it is therefore a good idea to know what event cards are still to appear in order to be able to evaluate one's odds of survival.

Although we did not receive the final production version of the game we can already say that the components' quality, print and graphics are of excellent quality and support the sci-fi theme very well. The only minor quarrel we have is that the players colours and goods are identical in our version, something which could easily be avoided.

We enjoyed playing "Galaxy Trucker" very much and all of us agreed that it offers a lot of replay value. Building a good ship that matches the threats of the upcoming space mission is definitely a challenge and fun at the same time. The time control of the building phase is truly ingenious and works excellently. Luck certainly plays a role in the game, but it is not predominant and players always have the feeling to be in control. In those cases where the events cards are just too disastrous to one's ship players may briefly think to be hit by bad luck but quickly realize that their ship had an unnecessary structural weakness, which they will avoid in the next round. As the game only lasts about one hour (once all players know the rules) there is plenty of chance to improve ones shipbuilding abilities. And I am sure that players long for a revenge after just one game played.

"Galaxy Trucker" is a very enjoyable game and definitely one of the best sci-fi games I have played since a long time.