At the time of the Hussite Wars in Bohemia six towns of the Upper Lusatia region allied in order to protect themselves against the robbing knights and to retain their wealth and the stability of Lusatia during the times of war.

The game "League of Six" uses this setting and three to five players take the role of tax collectors for King Sigismund. Their task is to attain the highest favor at the court of the king of Germany and Hungary by delivering valuable goods to the king's stores while simultaneously gaining the support of the civic leaders.

The game is played over six rounds, each representing one year. In every round all players use their tax collector to visit one of the towns and select which goods are to be paid as taxes. Then they transport these goods as fast as possible into the royal stores or the stores of the civic leaders.

What sounds like one of the many well-known resources management and route optimization games - "Notre Dame" or "Thurn and Taxis" come to mind here - is a completely new, refreshingly coherent game due to some surprisingly innovative game mechanics. Let's look at some of them in more detail.

At the beginning of the game the six town tiles are places around the countryside board in a random order. 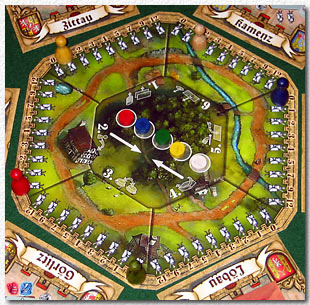 A circular road on the board connects the six towns. It is used by the tax collectors to travel to a town of their choice to collect the taxes. On the countryside board we find two important features: a movement order track used to define the order in which players select the town they want to visit with their tax collector and a bidding track for each of the towns.

Players indicate on the bidding track how many guards - the "currency" in the game - they are willing to pay to be allowed to stay in the town and collect taxes. If a player enters a still vacant town, he places the tax collector pawn on the "zero" field of the bidding track of that town; thus initially paying nothing. As soon as another player enters an already occupied town, the newcomer must offer a higher amount as already indicated by the current occupant in order to be allowed to remain in the town. The two players concerned increase their bids until one player passes. This player then receives the amount of guards bid by the other player, then leaves the town and immediately enters another one, paying a distant dependent fee for traveling on the circular road. Here, the bidding process starts over if the town is already occupied by another player.

As the towns offer different kinds and quantities of goods some towns are more valuable than others. This is where the movement order track comes into play as it specifies which player may first select a town to travel to. Those players who paid fewer guards in the previous round are now the first to select a town. This elegant mechanism most of the time ensures that the player with the least attractive town in the current round will select first in the next round.

The whole bidding phase needs careful consideration by the players as it offers sufficient possibilities to waste money by careless travel and bidding. With some experience players will be able to use a multi-hop approach to their target town by traveling to intermediate towns first in order to save on road fees while at the same time collecting sufficient guards to win the bidding in their preferred target town. We found this part of the game design very challenging and one of the best parts of the game.

Each town tile indicates which resources are available in the town.

Basically, each town offers up to four different types of resources:

The availability of the town's resources varies between rounds, so that a city's attractiveness varies too, depending upon the round played and the tactics chosen.

The variation in resource availability is created by the tax tiles, which indicate the combinations of the available goods that can be collected. The tax collector in the town has the choice of turning the tax tile to a position of his liking thereby selecting one of the possible resource combinations.

The tiles permit the selection of only three to up to five groups of the goods offered in the town. Therefore it can happen that a town which yielded a lot of resources in the previous round may be not so attractive in the current round if the new tax tile only allows the collection of a few resources.

This beautiful element prevents permanently good positions on the game board but at the same time represents a potential problem when determining which of the towns provides the best value in the current round and how much it is worth to bid on is a lengthy analysis process. This may result in excessive playing time and a lot of idle time for the players. However, the analysis is so complex that even our "professional analyst" decided to play mainly by using his "gut feeling". Player interaction, i.e. the incalculability of the other players, also contributes so that players will often refrain from a complete analysis of identifying the absolutely optimal town.

Transport into the Stores

This is probably the most surprising new element in "League of Six". 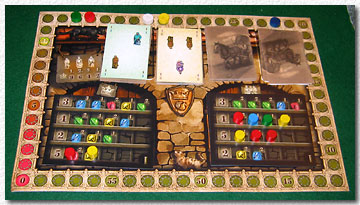 The order by which players may deliver their collected goods to the stores is determined by the number of horses the tax collector has acquired in the town, i.e. the player with most horses may select and supply first.

The delivery sequence is of crucial importance for winning the game, because the player delivering first has the full selection in both stores and shelves and each shelf requires different goods to be filled completely. Beginning with the active tax collector the players in turn fill the selected shelf with the goods they have collected until the shelf is either full or there are no more matching goods. Then the second-fastest tax collector selects a store and a shelf to be supplied, and so on.

Again, a careful analysis of the situation is required here to make a good choice. Often enough it makes sense to select a shelf, which one cannot fill alone or even one for which one does not have any goods at all, as long as it is guaranteed that the shelf is completely filled and one receives the extra points. Also here finding the optimal choice is not easy, but since the goods of all players are displayed openly one can quickly acquire sufficient experience to make fast decisions.

There are many ways to properly balance a game for a varying number of payers, often the game board or the number of resources is modified depending on player numbers. In "League of Six" this adaptation for varying player numbers is reached by the Hussite cards, which in each round lay siege to a number of towns. Towns under siege are not available for tax collection. The number of towns not under siege is identical to the number of players; therefore every player is able to place his/her tax collector into one town. The Hussite cards are drawn randomly at the beginning of a round.

From what I have described by now it becomes clear that luck plays some role in "League of Six" Apart from the variable start position there are:

It is important to note that these elements of luck exist but do not create a major impact. Players always feel that they are in control of the game and that all decisions they make have a direct influence on their chance to win. The elements of luck have been very carefully integrated into the game design and they create just the right amount of dynamics when tactics need to be adapted to the changing eco system.

Like all good games "League of Six" leaves players spoilt for choice when deciding between several different possible moves and tactics. Quite interestingly, playing the game intuitively seems to be equally promising as analytical play, which anyway has its limits. Time and more game plays will tell if in the end the thorough optimizer has a better chance of winning the game than the more intuitively playing gamer.

The indicated playing time of 60 to 90 minutes, thus 10 to 15 minutes per round, is realistic and surprisingly short for a game of this complexity. Our initial fear that playing the game would degenerate into tedious and repetitive analytical work did not materialize at all. Instead "League of Six" is an organic combination of new and well-known game mechanics with just the right amount of luck involved to make it a very well balanced and highly attractive whole. Highly recommended!