Opening the box delivers the first surprise: San Juan is a card game; no board, no colonists, no money. Yet, we find a similar set of "role" cards and buildings as in Puerto Rico. The basic principles are very similar to Puerto Rico: the players' task is to produce goods which can be sold for money and to erect buildings which can in to flavours: production buildings for goods and general purpose buildings which provide special abilities. 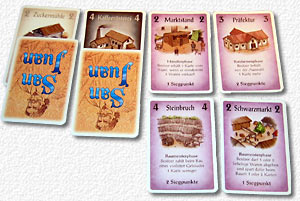 I am not going into much detail here about the rules of San Juan, but rather take a look at the difference to Puerto Rico. As in Puerto Rico players select a role and perform the action associated with it. But different to Puerto Rico the same cards act as buildings, goods and money, depending on the action performed. Erecting a building means playing the card of that build from one's hand as well as paying the building costs with other (building) cards from the player's hand. Producing goods means placing (building) cards from the draw pile face down next to the corresponding production building; and selling goods means placing produced goods (building cards) on the discard pile and drawing the corresponding amount of hand cards (now reflecting money) from the draw pile. For those familiar with Puerto Rico this is simple enough and easily understood. Those not familiar with Puerto Rico rest assured: the rules are very well written and the game can be played after only a brief introduction round.

While Puerto Rico has a lot of depth and is rich in different strategies (see our tips here), San Juan is a much lighter game. It has, however, a number of advantages over Puerto Rico, which make it a game for a wider range of players. First and foremost, San Juan is a lot shorter a game - playing time is around 45 minutes. We didn't see the high frustration level we discovered in Puerto Rico, which occurs when other players play suboptimal or start ganging up. In San Juan players are much more independent from other players' actions than in Puerto Rico but more dependent of card drawing luck, which is nicely balanced by the shorter playing, providing a chance for "revenge". Puerto Rico hardly leaves time for a replay the same evening. Last but not least different to Puerto Rico, San Juan can be played with two to four players equally well.

San Juan is definitely not a strategy game like Puerto Rico (you can find our strategy hints here) and in my opinion leaves little room for different tactics. Players are however always faced with tough decisions: is it worthwhile to keep an expensive building card until one has collected sufficient cards to be able to pay for it? Or is it better to use that card as money for a "quick win" cheap building? Is it better to go for more production buildings or for general purpose buildings? The former generate income, the latter save money due to cost savings. A good (German) description of the San Juan cards and the associated possible tactics can be found here.

Overall, San Juan is one of the best new releases in 2004 and a worthy successor of Puerto Rico. It should not come as a surprise that it has been selected as our "Game of the Month" in March 2004.