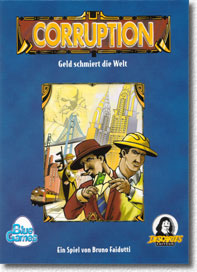 Scenario: Money makes the world go round - especially in a world of bribery and corruption. Three to seven players try to win valuable contracts by cleverly bribing government bodies.

The Game: Three government bodies - the city hall, the county administration and the capitol offer building contracts of values between $100.000 and $1.200.000. Players each receive a deck of identical cards consisting of 6 bribe cards valued $1.000 to $10.000 and four character cards - two journalists, a hit man and a judge.

The game plays over four rounds, each round beginning with randomly drawing two contracts per government body. These contracts are now on offer to the players, which try to place the highest total bribe for the contracts they like - most probable the highest valued ones on the table. Players have a choice of either placing their bribe card directly below a contract or putting it above the government body card, which represent the Swiss bank account of the respective body. After having played six cards each a round is complete and the contract is awarded to the player with the highest bribe on that contract.

This sounds pretty straight forward and far too simple for a Bruno Faidutti game. And, of course, there are a few little things that make the game much more interesting. First of all, depending on the round played some cards are placed face down, thereby not reveiling their bribe value. In the first round only the first card played by a player is face up with each round adding one more open card.

Then there are the character cards which may be played instead of a bribe card but not in the Swiss bank account. Once all players have placed their six cards hit men take their turn in order of play by killing one other character played for the same contract. Then any remaining judges act by voiding all bribes played on "their" contract so that the contract is not awarded in this round. And finally the journalists step in who negate one bribe card each, chosen by the player who played the journalist. Money placed into the Swiss bank account of a government body is of course safe from journalists but the big drawback is that this money is only counted half when finally tallying the bribes.

A new round starts with two new contracts for each of the government bodies and all bribe cards are returned to the players. Character cards however act only once and are not returned. The player with the highest total contract value goes first in placing new bribes.

Playing Time: The game can be explained in less than 10 minutes and played in about 30 to 45 minutes.

Westpark Gamer's Opinion: The game very much reminds of "Banana Republic" by Doris & Frank and Bruno gives due credit to this game in the rules where he also describes that he has been inspired by stud poker. This is of course a game of bluffing but here every player has the same 10 cards and there is no element of luck by randomly dealing out cards. Hence the resemblance to stud poker is very low. The psychology of the game is much more like Banana Republik or even Raj (Hol's der Geier) in that you exactly know which resources are available to each player and that you are left with guessing and double guessing the other players' tactics.

With a small number of players the game may become a little dry due to very little direct player interaction and depending on the group a lot of quiet thinking. With more players the stack of bribe cards per contract is so large that it becomes almost impossible to guess on the tactics of other players and people tend to gang up on the leader.

Overall this is a nice little game which can be played as a starter or finisher of an evening of gaming. I personally prefer a quick game of Raj or Liar's Dice, though.