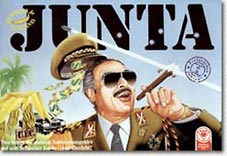 Scenario: A Republica of Los Bananas somewhere in the world. The players represent political powers within a state and try by hook or by crook to divert the main part of the public budget to their own private Swiss bank account.

The Game: The game board shows the important political quarters of a modern capital (presidential palace, parliament, police districts, barracks, embassies, central bank etc.). The game takes 9 to 11 rounds, in each round cash is put into circulation. When the whole stock of money is exhausted the game is over. Winner is the player with the highest amount of money in his bank account.

One player is El Presidente, an office in which he is elected democratically. The president assigns the remaining 6 positions (Ministry of Internal Security, Air Force, Navy or one of 3 Generals) to the other players. He is free in his decision, each player gets at least one and at most two offices.

This demonstrates the first partiality of the president. The president assigns the positions not uniformly among the players, but prefers those, who seem to be loyal; those player with which he attempts to feather his nest.

His "feathers" are the randomly drawn 8 to 24 million Pesos Foreign Aid, which form the public budget. The president distributes this money amongst all the players in an absolutely arbitrary manner. He may keep all the cash for his own or he may give all or part of it to one or several other players. This demonstrates the second partiality of the president and is called his budget proposal. It is voted on, and of course the hurt players vote against it. If the budget passes, it is divided up amongst the fortunate players. If it fails, the Minister can force it through with gun power.

Such a proceeding does not make friends. But Junta is not a game for friends. Everybody plays at his own bill. Alliances are concluded for short-dated aims only, and they last only so long as no other profitable goals are found. These may be an assassination attempt against a rich ally or a coup attempt against the governing junta.

Any player may initiate an assassination attempt against one other player. This happens by ordering an assassin to a specific location (bank, head quarter, home, lover, night club) to kill the denominated office person. The assassination attempt is successful, if the wanted person really moves to the chosen location. In this case the agent gets all the cash on hand of the victim.

A coup attempt may be initiated by any player. Before the coup starts each player must declare whether he chooses the rebel or the loyalist faction. Thereupon is a little war game, consisting of 6 turns, in which each side struggles to gain control over the majority of the 5 'key' areas of the capital. After the appropriate number of turns the coup is terminated and the result is counted.

If the coup is successful, the declared rebels vote on a new El Presidente. If the coup fails, the governing junta remains in power. The winning side can execute one person. An executed victim looses all his collected political influence and the president gets the cash in his hand.

The money the players get during the game doesn't count for the winning balance at the end of the game. To determine the winner, only the money on the Swiss bank account is evaluated. And how do you manage to it get there? In going to the bank and crediting your cash to your Swiss account. This sounds quite simple, but it isn't. In political turbulent times the bank is closed or takes lunch hour and is inoperable for your transaction. Additionally the assassins lie in ambush in the bank, and there is no more lucrative target than a partner with much cash.

Westpark Gamer's Opinion: As preparation for a junta session the game instructions give the advice to write 100 times "Junta is only a game". This a very useful advice because Junta is really only a game. A good game - for good players, permitted for players over 18 years (like love). It is an ingenious transformation of the political intrigues in a Republica of Los Bananas into a game scenery. You need sense of humour (and esprit) to enjoy the immorality and anarchy of this outlined society. Your companion in storming the president's palace immediately points to you to be executed after his election for president, if your are worth to be inherited. Such is life.

The mechanisms of the game are mature and well proportioned, even if fortune (the president) may distribute the wealth of the state very inequitably. The player, who obviously was favoured by fortune is immediately a target of the envy. He is closer to the brink of death than the harmless 'have-not', who may gain sudden richness by committing an assassination or a rebellion.

And how do you win this game? Peter tried it as president with psychical pressure, with terror against everybody - and often he was successful. Moritz trusted in the Minister of the Internal Security; in this position he may commit one additional assassination attempt per round. I don't know (exactly) which are the principles of a winning strategy. I dream of a great coup de main, a screened waiting for the opportunity, where my turn is the last and I can assassinate a rich play mate, who just assassinated a rich mate ... . And this of course in the bank, where I can immediately move all my booty to my Swiss account, before I have no chance to do this against the joined gang in the next round. For this I must be able to determine the turn order. And for this I have to be president and nominate the player left to me as Minister of the Internal Security ...

Walter's Rating: 9 (out of 10), because of the ingenious mapping of a junta democracy.