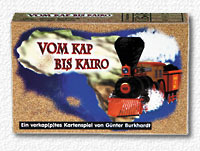 Scenario: Two to four players each try to build a railroad track through Africa - from Cape to Cairo. The track needs to be built through different types of terrain - from "easy" Savanna to "difficult" river crossings.

The Game: As with all Adlung games this one is a card game, too and as usual comes with German, English and French rules. Each player receives a train card and a treasury of 100 points which are later on used for bidding (there are no bills, tokens etc. provided so each player needs a pen and a piece of paper to keep track of his points). The second type of cards are the terrain cards which on their backside show a piece of track.

The game is played in two types of turns: a terrain bidding turn and building turn. Whenever a player begins his turn with no terrain card in front of his train he starts a bidding turn: he draws as many terrain cards from the facedown draw pile as there are players in the game and all players secretly bid points for the first choice. The highest bidder chooses the first card, reduces his point tally accordingly and places the card in front of his train (or at the end of a terrain card sequence should there be already cards in front of the train). Terrain cards show the type of terrain, a point value and a number of "bonus" tracks. Each type of terrain needs a different amount of tracks to be covered starting with the Savanna requiring 6 tracks up to the river requiring 10 tracks. Any bonus track printed on the terrain card(s) in front of the train count towards that requirement. As a consequence terrain cards with three bonus tracks (the highest bonus possible) usually go for a higher price than the ones with no track at all.

a building turn starts: the player who received the first card draws another card from the draw pile. This time the terrain is not important but the number of bonus tracks printed on the card. The player then decides if he takes that card to cover the terrain immediately in front of his train. He may only do so if the number of bonus tracks on terrain cards in front of his train plus the card he just drew adds to at least the amount of track required for covering the card. Any missing track may be made up by subtracting 10 points each from one's point tally - a very costly investment and only really worth it if one can finish (and win) the game by doing so. If the player decides that the investment is just too high he passes and the next player adds one additional card from the draw pile and checks if he is able or willing to build using the set of both drawn cards. If not the next player follows in clockwise order. Eventually, a player will build on his terrain card by placing the terrain card in front of his train face down, moving the train on top of that card and collecting the number of points printed on the card. Any track cards used for building are discarded.

Once a player has moved his train on the eighth terrain card the game is over and that player wins the game.

Playing Time: Rules are explained in about 5 minutes - playing time is about 30 minutes.

Westpark Gamers' Opinion: The game requires clever bidding tactics based on ones own terrain "portfolio" and the other players' terrain patterns. At the same time one needs to keep a close eye on one's point tally: its no good to save on points because they are not used for determining the winner. On the other hand it is all too easy to spend too much on that "easy" Savanna only to find oneself short of points to be able to quickly build across the mountains or a river immediately ahead of the train. As soon as you are two or more covered terrain cards behind it will be very hard to win. More often than not I found myself in the unfortunate position to have spent too many points in the early rounds leaving all those very valuable Savannas with three bonus tracks that appeared later to other players.

As with many good card games one always has the feeling to be able to control one's fate in this game, however there is a good portion of luck involved here as well. Nevertheless, the game is fun to play and since its very short playing time is an ideal starter for an evening of gaming or a perfect "last game" after a long evening of 1830 or alike.