Scenario: Horse racing on the royal turf of Ascot. Two to six players aim to win as much money as possible by betting on horses. Different to real horse racing each player has some means to take influence on the performance of the seven horses during the race. The player having made the most money after three races wins the game.

The Game: As in real life each of the seven horses has different strengths and weaknesses. These are assigned during the initial game setup by allocating points to all of the four attributes "speed", "endurance", "handicap" and "jockey". The points are assigned by randomly drawing a card for each horse. Each attribute can have a point value of 1 to 14, with the overall "strength" of all horses being equal. Players are therefore faced with horses that may be relatively strong in one attribute but considerably weak in others or horses that show an average performance in all four attributes. With this information players use tokens to place bets. Each players has three tokens, i.e. places three bets with one token counting double. Bets are placed openly and in sequence so that players are able to apply a certain amount of tactics here. 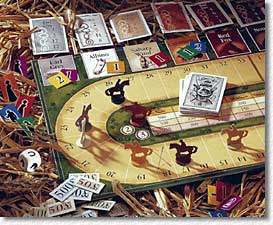 The attribute cards plus a die are the motor of the game. The die shows a symbol for each of the four attributes - the "speed" symbol printed on three sides and the remaining three attributes on each of the other three sides. On a player's turn (s)he rolls the die and decides which of the seven horses to move forward by the number of spaces corresponding to its strength of the attribute just rolled. Once a horse has been moved it may not be moved again until all others horses have.

When three horses have crossed the fiishing line the race is over and players pay or get paid for their bets: players who were unfortunate enough to bet on the last horse pay 100 pounds, players who bet on any of the first three horses get money paid from the bank. The amount paid depends on the position of the horse and the number of players that placed a bet on it. Three races are played to determine the winner and the last race pays double rates which keeps the final score open until the very end.

Reiner Knizia published a predecessor of this game in 1995 with Gibson Games under the title of "Turf - Horse Racing".

Playing Time: The game is easily explained and equally simple to play. Playing time is about 45 minutes.

Westpark Gamers' Opinion: This is a good game for starting or finishing a gaming session. It plays fast, is easily explained and is good fun for all players. The tactical possibilities are limited to placing the bets so that one is not too exposed - being the sole player having a bet on a horse makes that horse almost certainly the sure loser. The best part of the game is the "diplomacy" phase just after a player has rolled the die: convincing that player to move a particular horse usually leads to some nice discussions, threats and schadenfreude. The larger the group of players the more this aspect is dominating as the direct influence on the movement of horses decreases. In smaller groups this influence increases as each player moves horses more often. This game is certainly more of a family type game than a strategy heavyweight but played in the right group this game is quite fun.