Background
1598. Yspahan the fair becomes the capital of the Persian empire. Thus, being placed at the center of the world, the city enjoys a period of cultural and economic blossoming. The cities and villages of the region intend to take advantage of this expansion. Caravans loaded with goods and jewels set out for the desert, bearing the promises of a radiant future.

The players embody merchants trading with Yspahan. Meaning to take advantage of the coming of the Shah’s Supervisor, they score points by placing their goods in the right shops, by sending them to the Caravan, and by constructing buildings. At the end of the game, the player with the highest score is the winner.

Yspahan - the boardgame has been released by Ystari Games in October 2006 (at the Spiel 2006 in Essen).

Important: if you are using any of the language packs you MUST download and install it again after re-installing the game!

Program Development
It's been quite a while since the release of "Sankt Petersburg for PC" - but now here is a new Windows adaptation of a boardgame by the Westpark Gamers!

During last year I was approached by several gamers and asked if it wasn't time to implement this or that boardgame for the personal computer. Most of these people have no idea how much work is actually involved in such a project and how much patience is required from my wife…

But most of the time I simply could reply that I had not seen a boardgame, which fascinated me enough to spend a three digit number of hours of my pastime implementing it!

Until Yspahan was released and when I started my next project in early 2007 with a first, rough design.

Since then some month went by with many discussions and emails around this project. Much time went into the design of the user interface together with Aaron and Walter of the Westpark Gamers, resulting in several rewrites of its implementation. I think the effort was worth it. Cyril of Ystari Games was kind enough to provide us with the original graphics and Aaron used them to design the graphics for the user interface.

Last but not least, Walter and Aaron played more than a hundred games during our test phase and discussed bugs, strategies (thanks also to Thomas) and improvements with me - and this here is the result!

As usual one can argue a lot about the quality of the artificial intelligence and describe a lot in theory but hardly in a way to implement it. By the way, our main focus has been on the 4-player game…

Maybe there will be an update or improved strategies, but this will mainly depend on your feedback and the bugs you report…

Lots of thanks go to Ystari Games for their kind permission to adapt the boardgame for Windows PCs!

Runtime Environment
This program is a 32-bit Windows implementation; it should run on all Windows versions since Windows95 including Vista. I was not able to test all Windows versions and service packs - please report any problems you may have (there is a small problem with W2k - see the readme.txt).

The program has been developed under Windows XP with a screen resolution of 1024x768 - this is the best resolution for the game but it is also possible to play at different resolutions.

For smaller resolutions an automatic adjustment is made when the program is executed the first time. Should this not be satisfactory you can change the resolution using "Options" "Scale main screen …" which results in an adjustment relative to the 1024 resolution. Afterwards, please restart the program! Notice that at resolutions of 800x600 or less the screen layout becomes rather poor… 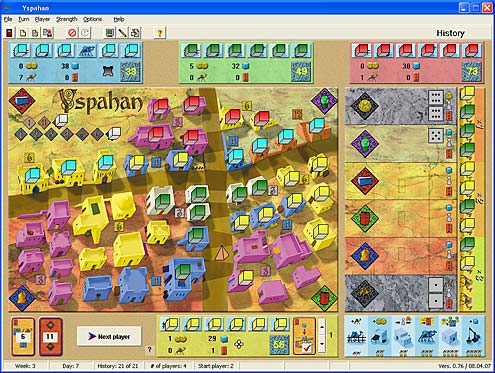 This is a short information about the user interface of the program. If you know my "Sankt Petersburg" implementation, then you will notice, that many functions (e.g. menues) are similar to that game.

Select number of players and start the game by menue or short cuts. Be careful: There a special rules for a 2 player game with some major differences to the 3 to 4 player game! Please read the 2 player rules on the homepage of Ystari: http://www.ystari.com/yspahan/eindex.php.

If you are the start player of a round select the number of yellow dice you want to use and push the "throw dice" button (right side of window).

All possible actions and target positions are highlighted. You can click on white cubes in the city, on marked supervisor squares, on gold or camels or the draw pile to select your preferred action. Only actions permitted by the rules and your current resources are highlighted.

The resources (gold, camels, cubes, cards, victory points) are displayed for each player in the respective user area.

Select one of your buildings with the mouse (supposed you have enough resources, the possible buildings are highlighted). Remember that in a 2 player game, buildings can also be build as a main action.

Click on the active card (top of your card stack) to use it. You can scroll through your deck of cards by using the up/down arrows left of the stack. For some cards a displayed dialog needs to be answered. For the "cube to shop" card you have to click on one shop of the city board (highlighted positions).

After pressing "Next Player" your turn ends and the other players' turns are executed.

Language Packs
We are providing Yspahan for Windows in different languages. In order to get the desired version for buttons, menues and other in-game text you need to download the respective language pack and install it. Just unzip it into the game's install directory.

Maybe someone out there is willing to translate this resource file into other languages? And if anyone would like to help us translating the help files into English we are happy to provide the resource files for that. Rules for the boardgame in various languages can be found on Ystari.com.